Skin - as above so below

"As above, so below" is a popular modern paraphrase of the second verse of the Emerald Tablet (a compact and cryptic Hermetic text first attested in a late eighth or early ninth century Arabic source), as it appears in its most widely divulged medieval Latin translation: 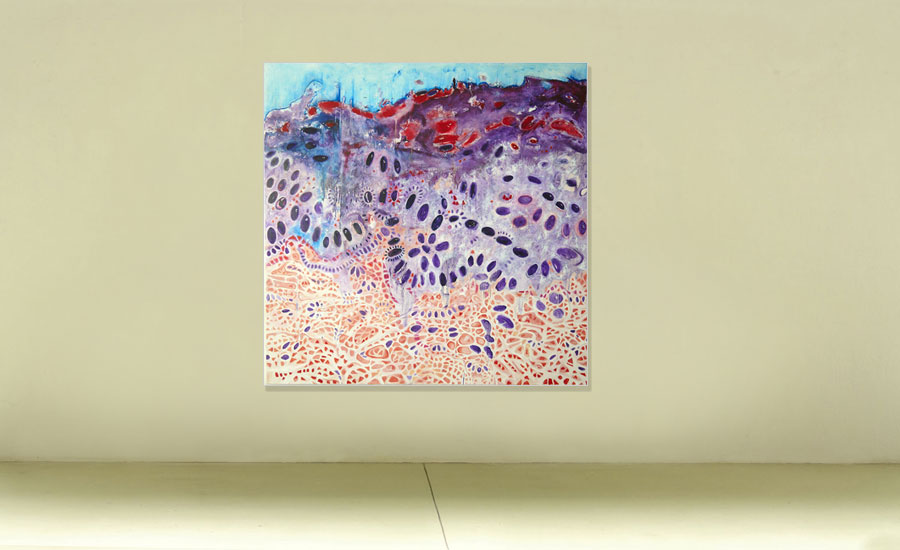 Among historians of philosophy and science, the verse is often understood as a reference to the supposed effects of celestial mechanics upon terrestrial events. This would include the effects of the Sun upon the change of seasons, or those of the Moon upon the tides, but also more elaborate astrological effects.

According to another common interpretation, the verse refers to the structural similarities (or 'correspondences') between the macrocosm (from Greek makros kosmos, "the great world"; the universe as a whole, understood as a great living being) and the microcosm (from Greek mikros kosmos, "the small world"; the human being, understood as a miniature universe).

This type of view is found in many philosophical systems world-wide, the most relevant here being ancient Greek and Hellenistic philosophy, where notable proponents included Anaximander, the Hippocratic authors and the Stoics.

In the painting "Skin" - which shows a microscopic cross-section through the skin - there are many geometric forms that are in close resonance with building blocks from the macrocosm.

If you have any question, don`t hesitate to get in contact

Skin - as above so also below